Skip to content
By Gillian KentJuly 22, 2008TravelLeave a Comment on Stirling Castle, the smallest distillery in Scotland and Blair Athol Castle 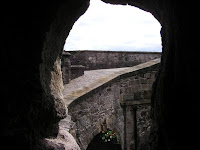 Yesterday we went to Stirling Castle. It has a violent and exciting history. There have recently been some amazing restorations. The castle was at one time covered in a gold coloured plaster. It must have been breathtaking up on the hilltop glowing like some sort of Camelot. Currently a set of 7 tapestries are being made for the Queen’s apartment. They are being made at the Castle by hand. Completion of all of them is planned for 2013. 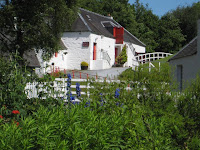 Today we drove to Pitlochry (about 30 miles away) to the smallest whiskey distillery in Scotland – Edradour. It is all done by hand. In 1 year they bottle slightly less than the big Glens make in 1 week. It is a very pretty spot. The tour was good except I would have liked to see the stored barrels and sniff the Angels’ Share. The Angels’ Share is the alcohol that evaporates through the barrel while it is aging 10 years. They lose about 20% to the ….um…lucky devils. Their whiskies are delightfully smooth and complex. 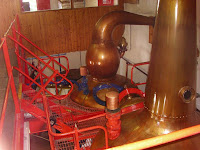 The copper stills at Edradour 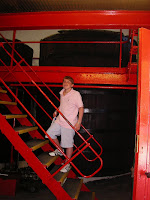 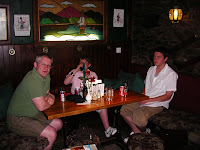 We had a terrific lunch at the Moulin Pub and Hotel. Gareth and I had to duck as the ceiling was so low. Son#2 had a Scottish Bunnet. It appears to be stew in a Yorkshire Pudding type pastry. Very Yummy! I think we may have a go at recreating this one when we get home. 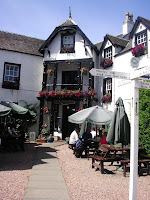 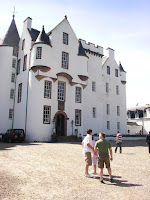 After lunch it was time for another castle but there was a problem. Scotland has no shortage of great castles. Which one of the several in easy driving distance do we choose? Eventually we decided on the Castle at Blair Athol.

The boys really enjoyed themselves. 1300s through the mid 1700 it was a true war castle. Then it became more of a residence with many renovations to make it comfortable and elegant. There is a huge collection of weapons (swords, spears, halberds, guns, armor etc) and there was a lot of hunting done. We are talking deer antlers in the high hundreds. Perhaps the most curious piece….okay one of the most curious, was a parure (necklace, bracelets, earring set) made of deer teeth set in gold and green enamel. Eeuw! 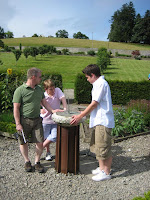 Sundial in the Hercules Garden at Blair Athol Castle

It is a terrific place to visit with some beautiful rooms. Much of the furniture is genuine Chippendale. Queen Victoria and Prince Albert stayed there and there is lot of stuff left from their visit. The grounds are also lovely. The enclosed garden with a huge pond was restored about 10 years ago and is really nice. In the winter they curled on the pond. The rocks had ornate silver handles. Very pretty and very cold. 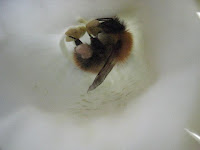 Bee’s Bum up a Foxglove…excuuuuuse me!