After Edinburgh we all agreed that personal and family history was more interesting than the huge national history you find at place like Edinburgh Castle. We decided that the Scone (pronounced scoon) Palace was where we wanted to go. The lady at the farm where we have been getting our eggs and milk recommended that we visit the Stanley Mills. As they are both close together, in or near Perth just off the A9, it seemed like the perfect plan. 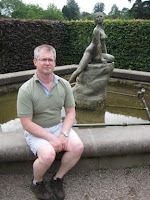 The center of the maze.

Scone Palace is fascinating. The palace was built in the late 16th century on the site of an Abbey 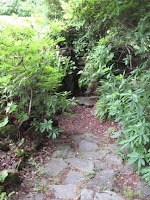 where many Scottish kings were crowned. It is beautiful and full of family antiques. The family was very wealthy and traveled widely in their merchant pursuits, military and ambassadorial roles. Consequently the house has a strong relationship with the Chinese Imperial House while it existed and still with the Japanese Imperium. They didn’t go in for the wholesale slaughter of the local animals like the family at Castle Blair so there were no examples of taxidermy except a couple of elephant skulls and two large bears. There were lots of family photos and portraits by some very famous painters. The family also is very involved with orchids and has several named after them. 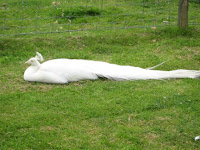 The Palace is beautifully maintained and the grounds are lovely. They are full of peacocks, including an albino male. There is a very good maze where the lads had a very good time. Del and I enjoyed the graveyard and working out what remains of the abbey. The butterfly garden was full of large bees that have a white bum. They are very industrious.
Remains of the Scone Abbey 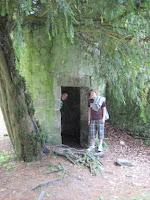 Stanley Mills was built in 1785 in a project headed by the Duke of Atholl. It was a cotton mill. They hired an inventor (NAME??) and he made an incredibly efficient mill using diverted water from the River Tay to run the whole place from the water wheel. At its peak it employed 900 people. It closed in 1989. It has been turned into an interactive adventure that is a lot of fun and very educational. To fund it 2/3 of the mill has been turned into condos. It is a lovely spot, right on the river too. The fishing is supposed to be very good. The activities in the Mill included doing the jobs of the children in the mill which required being very bored but not losing your concentration and being very nimble, danger was always present. We also had a go at competing with each other in managing a mill. It was well worth the price of admission. The lads were very interested and entertained. I hope they are able to continue with the restoration.